On March 14th, 2018, with the witness of Prime Minister Nguyen Xuan Phuc and senior executives in the delegation, Assoc. Prof. Hoang Minh Son – President of HUST signed an MOU with the aim of developing the academic cooperation and information exchange, especially in Computing and Mathematical Sciences with the University of Waikato (top 300 universities in the world). The event remarked the cooperation relationship of two universities and affirmed the international collaboration strategy of HUST in “expanding and promoting the collaboration relationship with prestigious universities in the world”. 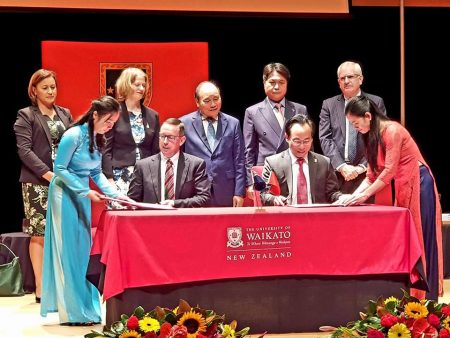 According to the memorandum, two universities shall cooperate in developing staff and lecturers’professional knowledge; students’exchange; academic documents, lectures, or textbooks’ exchange; organizing common activities such as workshops, conferences, and exhibitions, etc. Based on the mutual cooperation agreement, the related schools/faculties and institutes of the two universities shall carry out specific collaboration activities in staff and student exchange, co-supervising post-graduate student’s thesis, and developing joint research projects.

To meet the demand of the 4.0 industrial revolution, Univeristy of Waikato is currently priority to conjoin training attached to researches on Information Security and Safety, Big Data, etc. Meanwhile, Hanoi University of Science and Technology is also building and exploiting ELITECH project toward gifted students who have a desire to become excellent engineers, experts, and managers in the core engineering and technology sectors; focusing on training high quality human resources. Therefore, the signing of this MOU with University of Waikato has a remarkable meaning to the development strategy of Hanoi University of Science and Technology for the upcoming time as opening the creative and internationalized academic environment. 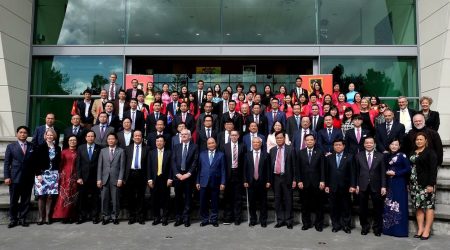