On May 6, 2018, the APhO 2018 Opening Ceremony was held at the Hanoi University of Science and Technology, Viet Nam with the participation of 25 delegations representing 25 countries and territories in the Asian region. 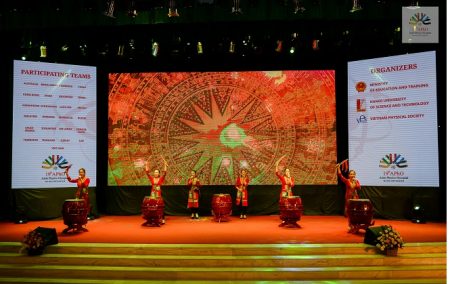 In his welcome speech, Prof. Phung Xuan Nha proudly said: “As the host country of APhO 2018, I would like to express my congratulations to the contestants, who are the young, talented and enthusiastic members of the scientific community, pursuing the new knowledge for the development of Physics for the sake of your own country as well as the entire mankind in the years to come. I hope the exchanged-activities among students, teachers of Physics and the scientists from many Asian and Pacific countries and territories will bear unforgettable experiences in Viet Nam.”

In addition, Mr. Leong Chuan Kwek complimented that: “Viet Nam has been preparing really well for APhO 2018. It is a great honor for the country”.

Taking part in the Ceremomy, Vladimir Mikho, a contestant from the Australian delegation said: “I am very impressed by the performances in the Opening Ceremony today. It is really nice to be here in Viet Nam and have fantastic experiences.”

Having the same feeling, Ly Sovan from Cambodia excitedly shared his opinion: “I like the performances so much. I love the traditional culture of Viet Nam as well”. 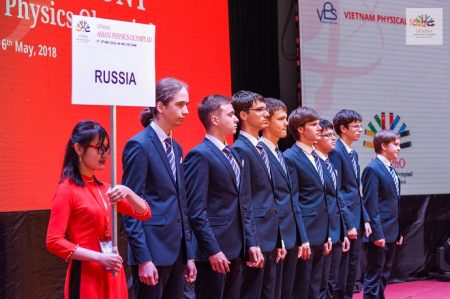 Talking about the coming exams, Vladimir Mikho especially emphasized: “We are all worried about this competition. However, it doesn’t matter how we do, it is just the matter that we try our best to perform well in this competition”.

As the contestants are going to have the experimental competition on May 7, 2018, the APhO President highlighted that “Establishing friendship is really important. I hope that no matter how the results are, the students should establish their networks.”

May all the contestants give your best mood and performance ever today!